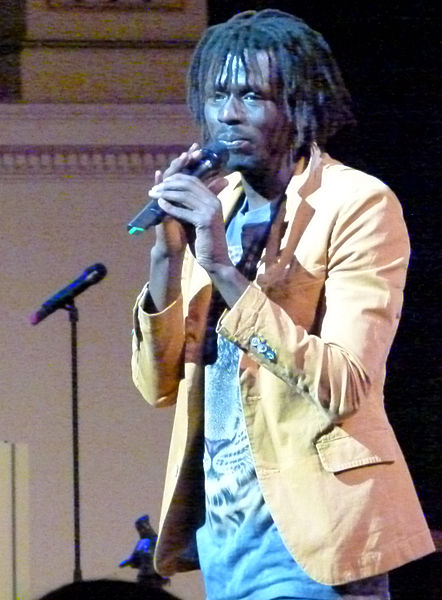 Emmanuel Jal is a political activist, musician, actor and former child soldier from South Sudan. As a young child, he lived in a small village in the Bahr el Ghazal region of Sudan (now South Sudan). At the age of seven, his mother was killed and his father became a top commander within the Christian Sudanese Liberation Army. Their goal was to fight for the Freedom of Sudan. Not long after this, Jal was conscripted to join the Christian Sudanese Liberation Army. He would end up being one of over 10,000 child soldiers who fought for over a decade in the Sudan civil war.

Jal was orphaned and left to fend for himself. He had lived through a complete horror: “marching through miles of desert toward Ethiopia, past the bones of adults and children who had fallen on the trek; witnessing the deaths of friends and family members; killing soldiers and civilians with a gun he could barely lift; starving to the point of near-cannibalism, and coming to the edge of suicide.” Extraordinarily, Jal survived this unbearable experience and this became a turning point in his life. He was rescued by Emma McCune, a British Aid worker, who helped him travel to Kenya. This was the beginning of a journey that would help him recover from the traumatic experience of being a child soldier and lead him to finding music as a form of therapy.

Jal recorded and released his own album and had a number one hip-hop single in Kenya. This led him to perform with international stars such as Bono, Moby, Peter Gabriel, Alicia Keys and Joss Stone. Overall, he has released five albums which include Gua, Ceasefire, War Child, See Me Mama and The Key. He has performed at multiple venues and events, some of which include Live 8, Nelson Mandela’s 90th Birthday Concert and the One Concert for his holiness, the Dalai Lama.

In addition to music, Jal has also been involved in the film industry. In 2008, the documentary War Child was released which tells the story of his life. This film won twelve film festival awards from around the world. Jal played a lead character in the film Africa United in 2010 and appeared in the film The Good Lie in 2014.

Jal released his autobiography titled War Child in 2008. He is in demand as a speaker for events and has spoken at the United Nations, United States Congress, the G20 Summit and the Carter Center. He was made a Young Global Leader for the World Economic Forum. At his speaking events, he “offers a greater philosophical message about war and peace. He translates his traumatic past as a child soldier into a positive experience that reflects the strength of human character. His lecture focuses on his experiences as a child soldier in South Sudan, the power of the human spirit and how each of us can make a difference. Music is central to his message and at each appearance Jal raps for freedom and sings for absolution.”

In addition to his successful career, Jal has a passion for charities, especially Gua Africa. This is the charity that he founded that works with individuals, families and communities to help them overcome the effects of poverty and war. As part of a much larger campaign calling for peace, protection and justice for all of the Sudan, Jal released the song We Want Peace in 2010. This was done in preparation for the 2011 referendum in the Sudan and also to call for an end to all conflicts impacting innocent people around the world. This campaign was supported by a number of international celebrities such as George Clooney, Richard Branson, President Jimmy Carter and Kofi Annan.

These books are part of the library's General Collection:

These movies are located in the library's Popular DVD Collection:

Synopsis: For five years, young Emmanuel Jal fought as a child soldier in the Sudan. Rescued by an aid worker, he's become an international hip-hop star and an activist for kids in war zones. In words and lyrics, he tells the story of his amazing life. -TED